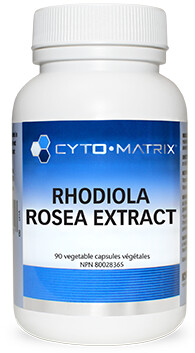 Rhodiola rosea, also known as ‘golden root’, is a medicinal plant that has traditionally been used in Russia, Scandinavia and other European countries as an adaptogenic herb capable of improving the body’s resiliency to stress. Its use as a stimulant to increase attention span, memory and physical endurance during times of stress has repeatedly been supported by clinical research.

Athletes may benefit from rhodiola’s adaptogenic properties, too. This makes sense given that exercise is a form of stress on the body and mind. Case in point, short-term rhodiola use can increase time to exhaustion and oxygen utilization during athletic performance in untrained athletes. It has also been found to reduce levels of inflammation in the body after intense exercise, meaning that it can speed recovery times.

Finally, rhodiola is a powerful agent when it comes to mental health. In people suffering from mild to moderate mood disorders, rhodiola extract can significantly improve symptoms such as insomnia, self-esteem and emotional stability. Improvements in those who report being ‘wired and tired’ meaning that they are anxious but exhausted.

It appears that rhodiola is able to positively impact mood, energy and stress coping through cortisol balancing, blood sugar regulation and neurotransmitter support. Most notably, research has shown that it can prevent the breakdown of adrenaline, serotonin, dopamine and acetylcholine, thereby increasing their action in the brain. Although there are many ingredients within the whole plant extract, rosavins and salidrosides are the key active ingredients that provide medicinal action.

Cyto-Matrix’s Rhodiola Rosea Extract provides 150mg of rhodiola rosea extract per vegetable capsule, standardized to contain the evidence-based 3% rosavin and 1% salidroside content. Rhodiola Rosea Extract is a great option for those feeling stressed or overwhelmed, to help the body adapt and adjust accordingly.