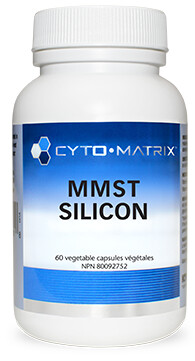 The most stable and highly bioavailable silicon source for your hair, skin and nails, with added biotin.

The problem is that most forms of silicon are poorly bioavailable because they are insoluble. Naturally occurring silicon sources are large and will clump together to form polymers. Supplemental forms that are synthesized to be smaller molecules tend to be unstable. In both cases, silicon becomes difficult for the body to absorb.

The solution to this problem is Monomethylsilanetriol (MMST). MMST is fully stable without polymerization potential. Its small methyl group maintains the stability of molecular bonds and keeps the molecular charge neutral. This makes MMST the most bioavailable organosilicon molecule capable of significantly increasing silicon levels within the body. Head-to-head studies have shown that MMST is 3.5-times better absorbed than choline-stabilized orthosilicic acid (ch-OSA), and 21-times better absorbed than horsetail, bamboo and colloidal silicon sources.

Vitamin B7, more commonly known as biotin, is also a core component of hair, skin and nails. Research has shown that biotin supplementation over the course of 6 months can improve nail thickness in women with brittle and splitting nails. MMST Silicon conveniently combines 10mg of elemental silicon sourced from Nova Scotian quartz and 2.5mg of biotin per capsule. MMST Silicon is a simple, yet effective, formula for supporting collagen production.