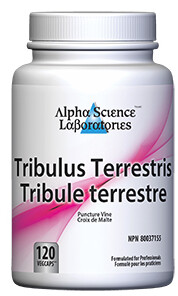 Suggested dose for adults: 2-3 capsules daily with meals or as directed by your health care practitioner.

Primary action: This herb naturally and safely stimulates the pituitary gland to increase the production of luteinizing hormone thereby increasing free circulating testosterone. This has the effect of decreasing male and female infertility and male impotence and also of increasing libido.

In men, luteinizing hormone leads to an increase in testosterone production. Tribulus Terrestris stimulates the pituitary gland to release luteinizing hormone and has been found to increase the level of free circulating testosterone by approximately 40%. In studies, Tribulus Terrestris has been observed to increase the sperm count and also sperm mobility in males with low sperm count or non-viable sperm.

In women, luteinizing hormone causes maturation of the ova and also controls the production of androgenic hormones (e.g. testosterone). Studies have shown that women with low testosterone levels have a low libido. When testosterone levels in these women were increased artificially by ingesting testosterone, an increase in the libido was observed. However, when testosterone was given to these women the dosage had to be closely monitored in order to control the development of secondary male characteristics. With Tribulus Terrestris, the body produces luteinizing hormone, which controls the production of testosterone, which in turn is controlled by a negative feedback loop at several levels. The level of testosterone is then not allowed to rise dramatically, thus reducing the chance of negative side effects such as the development of secondary male characteristics associated with conventional drug treatments.