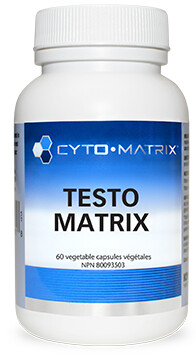 As we age, there is a natural decrease in the production of sex hormones such as estrogen, progesterone and testosterone. Unfortunately, these hormonal changes can come with a number of unpleasant symptoms. For example, low testosterone production, also known as andropause, often presents with symptoms of low muscle mass, reduced strength, decreased libido, low mood, impaired cognition and an overall reduced quality of life. This is where Testo Matrix comes into play. Testo Matrix has been specifically formulated to support healthy testosterone levels and its associated symptoms, including an imbalanced and low mood.

Testo Matrix includes KSM-66® Ashwagandha, a proprietary full-spectrum extract of withania root with extensive clinical research to support its use for stress-related health concerns. Through a patented alcohol-free, solvent-free extraction process that took over a decade to perfect, KSM-66® is able to retain high concentrations of both hydrophilic and lipophilic components of the raw root. KSM-66® is unique from other Ashwagandha root extracts as it has specifically been studied and shown to improve sperm parameters, muscle strength, testosterone levels in males, as well as sexual function in females. KSM-66® also has over 20 human clinical trials to support its efficacy in areas of memory and cognition, stress reduction, improved thyroid function and weight management.

Crocus sativus, more commonly known as saffron, is a traditional spice that is now known to have multiple health applications. Its ability to block NMDA receptors and protect the nervous system likely explain why saffron has multiple human clinical trials to demonstrate its effectiveness for promoting healthy mood, even when compared to traditional selective-serotonin uptake inhibitor (SSRI) therapy, and also for supporting cognitive function. In addition, saffron has traditionally been used as an aphrodisiac. Modern research has confirmed that it can effectively improve symptoms of erectile dysfunction and overall sexual function, while also improving sperm parameters. Collectively, these actions strongly support saffron’s use for the male population and those suffering from andropause.

Zinc’s reputation as an immune boosting mineral is well-deserved, however, it is very much indicated for healthy mood balance and hormonal support. In particular, a zinc deficiency in males can negatively affect sperm parameters and it is one of the few nutrients that has been shown to contribute to low testosterone levels. Moreover, zinc supplementation has been demonstrated to increase brain-derived neurotrophic factor and block NMDA receptors in the brain, augment SSRI therapy and, ultimately, improve subjective markers of mood.

All in all, Testo Matrix was formulated to provide evidence-based dosages of KSM-66® ashwagandha, saffron and zinc to optimally support healthy testosterone levels and mood in males. Each bottle contains 60 vegetarian capsules.