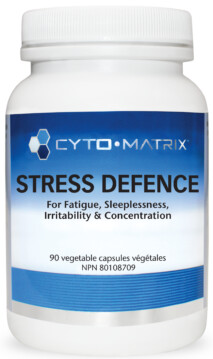 A blend of ashwagandha, magnesium and core adrenal nutrients to support the resistance phase of the stress response, including symptoms of fatigue, sleeplessness, irritability and poor concentration.
Vegan. GMO, gluten, soy and dairy free.

The human stress response is believed to follow a predictable path: first the alarm stage, followed by the resistance stage and finally the exhaustion stage. If stress is chronic and unmanaged, the body can only withstand or ‘resist’ ongoing stress for so long before it is no longer able to adapt and systems fail. Unfortunately, the modern world often doesn’t allow for escape from common and complex stressors such as finances or relationships. Instead, we must find ways to support the body and defend against the detrimental health effects of these ongoing stressors. Stress Defence by Cyto-Matrix is designed to support individuals in the “resistance” stage of stress, lowering cortisol and improving symptoms such as fatigue, sleeplessness, irritability and poor concentration.

Withania somnifera, more commonly known as ashwagandha, is a traditional adaptogenic herb used to support the body in times of stress. This herb has been used for centuries for a wide array of stress-related ailments. Modern research has shown that it can modulate the stress response by lowering blood cortisol levels and increasing quality of life scores in adults with chronic stress.

Sensoril® ashwagandha is a patented and well-studied extract with a dozen clinical trials to support multiple aspects of human health and the stress response. Specifically, it has been shown to increase energy, reduce cortisol levels, suppress food cravings, improve cognition, improve athletic performance and reduce exercise recovery time. Individuals taking Sensoril® find subjective improvements in stress management by reporting less irritability, improved concentration and reduced fatigue. Sensoril also has evidence to show that it can reduce inflammation, as per high-sensitivity C-reactive protein measurements, and reduce joint pain in those with knee discomfort. It is standardized to 3 bioactive ingredients,
withanolide glycosides, withaferin A and oligosaccharides, to ensure consistent quality and results.

While adaptogenic herbs like ashwagandha are beneficial for regulating stress hormone production, the adrenal glands still require core nutrients to function properly. Specifically, vitamins B5 and B6 aid neurotransmitter production, improve adrenal function and modulate cortisol levels. Vitamin B5 down-regulates the excess production of cortisol while vitamin B6 is a necessary cofactor for the production of important mood-balancing chemicals such as GABA and serotonin. Vitamin C, although classically thought of for its role in regulating immunity and cardiovascular function, is also an integral cofactor in the adrenal production of cortisol, dopamine and epinephrine. The adrenal glands actually contain one of the
largest concentrations of vitamin C in the entire human body. Collectively, these three vitamins are crucial for regulating the stress response.

Finally, magnesium is considered a core mineral for regulating and resisting the effects of stress. Not only is magnesium necessary for maintaining proper nerve and muscle function, it is also needed to create cellular energy in the mitochondria and as a cofactor to build DNA, RNA and many proteins. Clinical trials and large-scale evidence has shown that magnesium can be helpful in cases of muscle tension, fatigue, insomnia, attention-deficit hyperactivity disorder (ADHD), osteoporosis, migraines and more. Despite its vast importance, it is commonly deficient in the Canadian population due to poor diet, medication depletions and stress. Ironically, not only does increased stress exposure lead to a greater demand for magnesium but also a greater deficit.

Stress Defence by Cyto-Matrix contains the patented Sensoril® ashwagandha in addition to a balanced blend of these key adrenal supportive nutrients to protect the body from ongoing stress and its ill-effects. Vitamin B6 is found in its active pyridoxal-5-phosphate form while magnesium is delivered in its highly stable and bioavailable bis-glycinate form. Ultimately, these nutrient forms lead to greater absorption and tolerability in the body. Stress Defence is available in vegetarian capsules and is a vegan-friendly formula.

Unit of Measure above: Each capsule contains