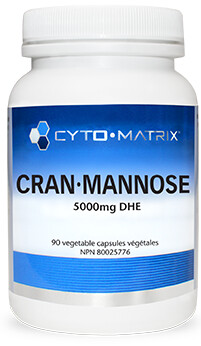 Urinary tract infections (UTIs) are a common concern in women. Symptoms typically include pain and urgency on urination. They are often chronic in nature with 1 out of 5 women having recurrent UTIs. Additionally, there is a high potential for antibiotic resistance due to frequent and ongoing antibiotic use. This means that UTIs can significantly and negatively impact the quality of life for many women and effective alternative solutions are in high demand.

D-Mannose has emerged as one of the most promising effective treatments for UTIs. D-Mannose is a simple sugar, found naturally in many fruits, that has been shown to inhibit E. coli adhesion to the bladder wall. E. coli is the primary bacteria responsible for causing more than 80% of UTIs. By preventing the bacteria from latching onto the bladder wall, D-Mannose acts as a natural anti-infective agent. In fact, clinical trials have confirmed that D-Mannose reduces the risk of recurrent UTIs as effectively as nitrofurantoin, but with fewer side effects.

Cran-Mannose UTI by Cyto-Matrix combines D-Mannose and a high-potency standardized cranberry extract, acting as an effective tool in the prevention and the treatment of uncomplicated UTIs. This natural combination is successful without the typical side effects associated with antibiotic use, including antibiotic resistance or diarrhea. The dosage of Cran-Mannose UTI can be easily adjusted for UTI prevention and recurrence or for treatment of active UTI symptoms.