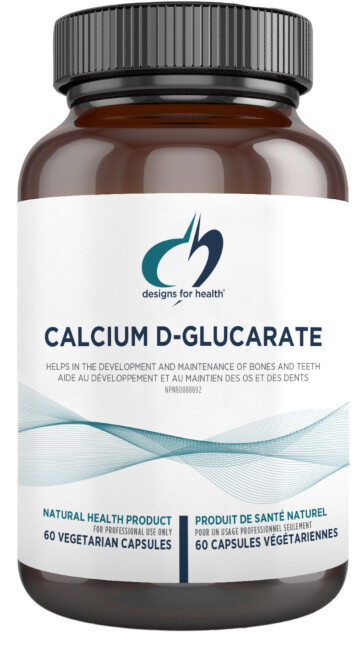 Calcium D-Glucarate by Designs for Health

Calcium-D-Glucarate is calcium bound to d-glucaric acid, which is a natural compound produced in small amounts by the human body and is abundantly found in various plant foods such as broccoli, cabbage, kale, apples, oranges, and grapefruit.

Research shows that d-glucaric acid derivatives such as calcium-d-glucarate help support the body’s natural elimination of excess steroid hormones and toxins. Calcium-d-glucarate assists in the detoxification process as it forms conjugates with unwanted estrogenic hormones and environmental toxins, which are then eliminated from the body instead of being reabsorbed.

Mechanism of Action
In the GI tract, calcium-d-glucarate is metabolized into three compounds, the most active being D-glucaro-1,4-lactone. This metabolite increases the detoxification of carcinogens by inhibiting β-glucuronidase, an enzyme that can deconjugate potential toxins which are being eliminated via the phase II detoxification glucuronidation pathway, allowing them to be reabsorbed back into the body instead of being excreted. With the inhibition of β-glucuronidase, toxins can be safely excreted from the body.

Glucaric acid is not available as a supplement, while calcium-d-glucarate is. Oral supplementation of calcium-d-glucarate is an ideal way to provide the body with an efficient, slow-release source of D-glucaro-1,4-lactone. By supplementing d-glucarates, in this case, the stabilized calcium form, one can favor the body’s natural defense mechanism for eliminating toxins, carcinogens and other tumor-promoting drugs, reducing their effects.