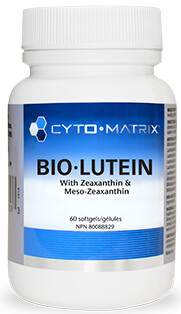 SKU 871740001301
$28.95
Eyes & Macular
In stock
1
Product Details
An evidence-based blend providing 20mg of lutein, 2mg of zeaxanthin and 2mg of meso-zeaxanthin per softgel. Supports visual acuity and protects the eyes from the damaging effects of blue light emitted from electronics.

Approximately half a million Canadians are estimated to be living with significant vision loss that affects their quality of life. Although the most common cause of vision loss is age-related macular degeneration (AMD), a new generation of children and young adults are becoming more and more affected by the high volume of electronic usage in the form of computers, tablets and cell phones. In both circumstances, damage to the central portion of the retina, known as the macula, negatively affects visual acuity and can cause significant eye fatigue.

Fortunately, targeted carotenoids known as lutein, zeaxanthin and meso-zeaxanthin can protect the macula and eye health as a whole. These compounds are found in various parts of the macula, but lutein is most densely concentrated in the peripheral macula, meso-zeaxanthin in the central macula and zeaxanthin covering the areas in between. Their role is to help to protect the eye from harmful UV lights and they have been demonstrated to reduce the risk, progression and severity of AMD and other visual disturbances such as cataracts.

The problem is that these carotenoids cannot be made by the body and research has shown that almost 70% of adults do not consume the recommended amounts of vegetables, fruits and other carotenoid sources. This means that supplementation is required in a large proportion of the population.

Few supplements offer complete protection of the retinal tissue with the ideal 10:1:1 ratio of lutein, zeaxanthin and meso-zeaxanthin, respectively. This is the same ratio of carotenoids found in nature, and only this specific ratio has been shown to effectively filter out blue light that is emitted from electronic screens such as cell phones and computers.

Consequently, this 10:1:1 blend has been demonstrated to reduce eye strain and fatigue with prolonged blue light exposure from electronics and also improve visual performance markers such as contrast sensitivity, glare and processing speed. Perhaps most impressive, research has shown that this blend can significantly improve sleep quality and reduce headache frequency, when compared to placebo, in individuals exposed to prolonged screen time.

Bio-Lutein conveniently provides the evidence-based dosage and ratio of lutein, zeaxanthin and mesozeaxanthin in just one softgel per day. Moreover, Bio-Lutein is readily bioavailable, significantly increasing blood carotenoid levels in just 2 weeks and increasing macular pigment density in only 8 weeks. Lutein, zeaxanthin and mesozeaxanthin found in Bio-Lutein are sustainably sourced from marigold extract and each bottle delivers a two-month supply of 60 softgels.