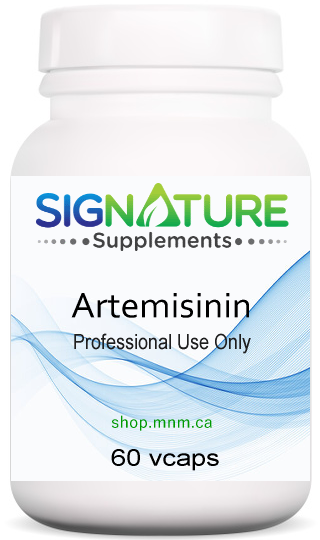 Artemisinin is a derivative from the herb sweet wormwood (Artemisia annua) and has been used as a staple in TCM due to its abundant therapeutic properties. Artemisinin is active against Plasmodium sp., the known parasite that causes malaria. Evidence has concluded the benefit of artemisinin as an antiprotozoal, antimicrobial, antifungal and anthelminthic. Artemisinin’s medicinal efficacy also extends as a potent anticancer compound, showing positive activity in a wide spectrum of cancers and cancer related pathways. Studies have provided insights into artemisinin’s anti-inflammatory properties in both digestive tract infections and pain management. With a potent antioxidative profile, artemisinin’s whole plant flavonoid concentration has been shown to synergistically aid in its overall antimalarial and anticancer potential.

Artemisinin is a suitable treatment alternative to some of the conventional antimalarial and anti-protozoan drugs due to its similar therapeutic equivalency and safe side effect profile. Research has shown artemisinin’s therapeutic benefit in the treatment against protozoan parasites including Leishmania spp., Trypanosoma spp., Toxoplasma gondii, Neospora caninum, Eimeria tenella, Acanthamoeba castellanii, Naegleria fowleri, Cryptosoridium parvum, Giardia lamblia, Lyme, West Nile, and Babesia spp. Several studies have shown that artemisinin plays a supportive role in the management of several forms of schistosomiasis. Artemisinin has the antimicrobial ability to kill gram-positive bacteria similar to that of the antibiotic streptomycin as well as gram-negative bacteria such as Salmonella sp. and E. coli. Artemisinin has been found to have antifungal properties against Pneumocystis carinii, as well as antiviral replication reduction in hepatitis B and C, a range of human herpes, HIV-1, influenza and CMV. From an anti-inflammatory and anti-microbial standpoint, artemisinin has been shown to prevent H. pylori induced gastritis and gastric carcinogenesis via the inhibition of NFkB signaling.